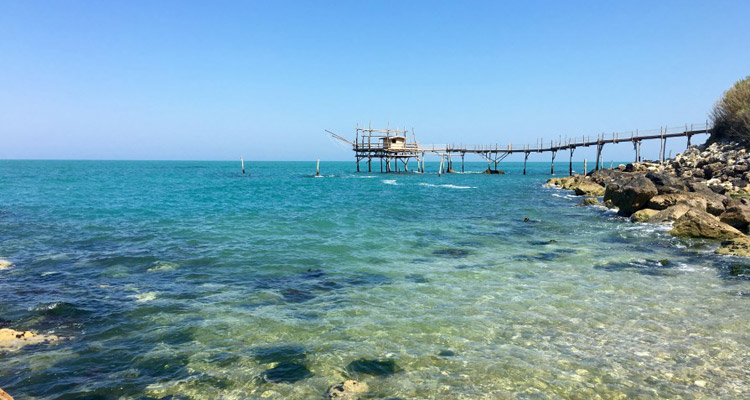 The coast of Abruzzi  introduces a notable heterogeneity, beaches of thin golded sand and stone lines, refined seafronts and wild reserves, in which the biotopo of the Mediterranean stain still stays intact.

*** Province of Teramo *** Seven Sisters: The 50 Km of thin golded sand make the ample and sure beach of Teramo, with its crystalline waters, the ideal place for a Holyday with the insignia of relax and fun. The shore alternates lines of uncontaminated natural beauty to splendid seafronts,  rentals and schools of windsurf, sailboat and canoes, proper both to the lovers of the nature and to the sportsmen.

Martinsicuro: Although Martinsicuro did not become an independent commune until 1963, Martinsicuro boasts extremely ancient origins, demonstrated by traces of Bronze Age settlements. For this reason the town has a number of extremely interesting monuments. Moving southwards, after the Marches Region boundary, it is the first of the seven seaside resorts in Teramo province.

Alba Adriatica: This commune was created in 1956 following its detachment from Tortoreto, and although it is a young borough. Alba Adriatica stands out for the business aptitude of its inhabitants. Proof lies in the evident vocation for tourism which has moulded it into one of the province’s most important seaside resorts.

Tortoreto Lido: The tourist exploitation of the coast has allowed the commune to become a bathing station of great call with its beach adorned of palms and sea pines, numerous hotels, camping, discos, sportfields and a beautiful aquatic park.

Giulianova Lido: A glourios past, testified by numerous monuments, an important the role today, that characterizesit as one of the most important bathing centers of the province, with his ample port, a good structure for the berth and the mooring of boats and an ample walk open to the public. The city offers, besides the numerous shops, galleries of art and antiquarian shops, a town Pinacoteca with very interesting paintings, an imposing Renaissance Cathedral, a suggestive Tower and beautiful rests of the ancient medieval boundaries.

Roseto degli Abruzzi: Situated at the mouth of the River Vomano, Roseto is a tourist resort and an important industrial centre. Its history is linked to that of the fortified town of Montepagano, an ancient municipality. In fact, after the Unification of Italy, the church holding the village divided the shore into quotas that it conceded in emphyteusis that then constituted the first nucleus for what is now the residential area. Roseto is one of the province’s most important resorts because of its beach and accommodation facilities.

Pineto: Pineto is a young, dynamic commune of just over 60 years of age, with a modern appearance. Mutignano, which for many years was a fief of the Acquaviva family, lies within the communal boundaries and it is also the oldest of the villages. Nowadays Pineto is an important seaside resort, one of the Teramo coast’s so-called “seven sisters”, thanks to its wholesome pine grove, from which it takes its name, and for its beautiful beach.

Silvi: Its origins date back to the Roman period. The old centre has a medieval layout and was often subjected to Saracen incursions, so for this reason was fortified. Its fortunate hilltop location dominates the shoreline beneath, where the town of Silvi Marina has been built and which is now an important holiday resort, one of the Teramo coast’s so-called “seven sisters”.

Città Sant’ Angelo: The city was probably born on Roman ruins, castled on a hill that lies only a  few meters from the coast, the city is one of the most suggestive suburbs of Abruzzo, thanks to the boundaries, to the ancient city gates and the narrow little roads, which stud it. Going down to the Shore, you can find Marina, sea extension of the historical center and vivacious bathing center. You have to visite the Collegiata of St. Michael Arcangelo, the Church of St. Michael, the Franciscan convent, today  center of the Town hall, the Churches of Sant’ Agostino, St. Bernardo and Saint Chiara.

Pescara: it is a town with a modern and industrial face, born in 1926 after the union of two centers, nd it owns an important tourist and industrial sector that interests mostly the zone of the modern Porto Canale. Pescara is remembered as the native-city of the aesthetical writer D’Annunzio, and preserves the famous house, where he was born, today turned to museum. The city inevitably dedicated its University and the Theater to him. Pescara, thanks to the airport, to the modern railway station and touristic haven, fulcrum of the regional communications. To visit: the I May Square, Corso Umberto, Corso Vittorio Emanuele with its numerous shops, the Temple of Conciliation, the Sanctuary Madonna of the Rosary, the Civic Museum and the Museum of the People of Abruzzo, the House of D’ Annunzio and the dannunziana pine forest.

Ortona: after Francavilla the coast shapes change and become tall and jagged. From the Haven of Ortona, fulcrum of fishing and of loval economy, you can embark for the Tremiti Islands. The fisher center has an ancient origin and rises on a promontory that dominates the sea.

Montesilvano: The city is devided into Montesilvano Hill, historical town center and Montesilvano Marina, on the Adriatic Coast. The history of Montesilvano begun in Middle Ages, as a smallcenter devoted to fishing, that developed only on the last decades the tourist-hotel sector. The strengthened medieval suburb entertains some interesting churches, as: the Church of St. Michael Arcangelo, S. Maria del Carmine and extra moenia the Church Madonna of the Snow, where some fine freskos are preserved. Among the folklorist Demonstrations you remember the Feats of Sant’ Antonio and the Madonna of the Snow’s devoted feast.

Casalbordino: The country lies only a few kilometres from Vasto and is set among the rivers Osento and Sinello. Its economy has a predominantly agricultural character, with typical crops of Mediterranean agriculture, and only on the last decadesthe tourist sector grew notably thanks to the beautiful beaches of the Lido and the good hotel activity. You can visit Madonna of the Miracles’ Sanctuary, which lies near the suburb. Numerous recoveries testify a remote Roman installation. Among the feasts we remember the Madonna of the Miracles’ Feast and the gastronomy feast of Clams. Not far from the sea and to its shoulders the stately Majella Massive, Casalbordino is geographically abandoned upon the imaginary path that connects the natural treasures of Abruzzo, the most luxuriant tops of the Appennini and the placid and sometimes wild adraiatic coastal lines.

Fossacesia: The commune is devided into two separated housing installations, the first one on the hill that coasts the river Sangro, the other one on the sea. Suggestive is the beach with the Punta della Baia del Cavalluccio. Fossacesia rises in XI century, following the monastic colonization of the Benedictines. Among the monuments you can visit the St. Giovanni in Venus’ Abbey, peaked on the sea, that is tightly tied up to the suburb’s history and is and still today one of the most famous monuments of Abruzzo. Among the paesane feasts we remember the Arrosticinis and the Marrocca’ Feast, the Tree Feast and the Feast of Grapes.

Vasto: Vasto is one of most the important realities of the province of Chieti and is situated on a hill, that degrades slowly toward the sea. The legend narrates that Diomede, king of Etolia, after the Troy Siege went voluntarily into the exile from its Country, to set him with his people into Southern Italy in a small town called Histonium, today known as Vasto. It was for a long time a commercial city thanks to the flourishing Haven and now the town is still well known for its artistic testimonies.We can remember the St. Lawrence’s Feast, the Feast of Saint Mary Stella Maris (with the procession of boats), the Sagnes and Beans’ Feast, the Watermelon Feast, the Toson D’Oro, the Party of Ritorno and the Sacred Thorn.

San Salvo Marina: The Town is situated near to the River Trigno. Its history began around the XI century, subsequently to the colonization of the Benedictine monks, who biut a stately monastery that has been destroyed. The ancient part is situated on a hill that dominates the plain of the Trigno River, among olives, vineyards and peache-trees, with a marveloussight on the Adriatic sea. Along the coast lies the flourishing bathing locality of San Salvo Marina. We remember the Feast devoted to St. Rocco, Le Some, St. Thomas’ Fires, the Fish Feast and the Gamgs Assembly.

Torino di Sangro: The country was found near to the sea, among the mouths of the rivers Sangro and Osento. The Marina of Torno di Sangro developped progressively through years, becoming one of the principal destinations of summer tourism. Among local feast we remember: The Forenoon of the Ornate Face, Grape Feast and the Party of Maria Santissima of Loreto.