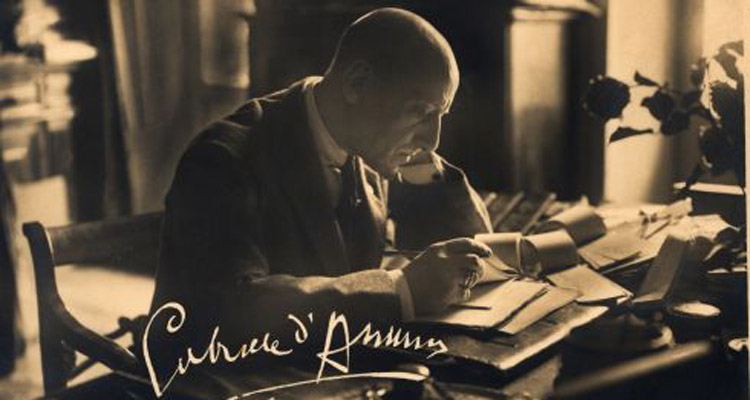 In Pescara, native town of the poet, you can visit his native house, today turned to Museum, and the Governement Building, which contains the grandiose painting named “Iorio’s Daughter”, masterpiece by the artist Francesco Michetti, from which the Prophet has drawn the inspiration for his homonym theatrical work.

Continuing toward Francavilla, you cross D’Annunzio’s Pine Forest, only a few footsteps from the waters of the Adriatic Sea, ploughed by the “paranze”, and not far away from the beach once crossed by the flocks in their migrations, described into the verses of the poem “September”.

In Francavilla a Mare you an see Michetti’s Convent, where the Poet sheltered during the writing of the “Pleasure” and the Town hall, in which “The Cripples’ Street” is preserved, another important painting by Michetti, inspired by “The Triumph of Dead” of D’Annunzio.

In Miglianico, in Saint Michael Arcangelo Church there’s  sixteenth-century fresko named “Madonna between two Saints”, which inspired the poet during the composition of “Le Novelle della Pescara”. The same church entertains the sculpture of Pantaleone, city’s patron, whose feast ispired the poet for homonym work.

Return to the cost and go South in direction of San Vito Chietino, where Dannunzio lived a short but intense love-story with Barbara Leoni, that ispired the “Triumph of Death”, played in one of the coast inlets between St. Vito and Fossacesia, where rises the Abbey of St. Giovanni in Venus, that overhangs the sea from the top of a hill. In Casalbordino the streets of the Prophet and Michetti meet again: “The Triumph of Death” and the painting “Cripples’ street” recall the pilgrimage from 09th till 11th June to the Madonna of the Miracles’s Sanctuary. The pagan feast of the St. Zopito’s Ox in Loreto Aprutino, that develops still today every 22th and 23th May, described in the “Virgo Anna” and in the “Le Novelle della Pescara”, is very important. Far away from the coast, in Anversa, there are the “Throats of the Sagittarius” that serve as background to theatrical work “The Torch under the Moggio” and the suggestive “Caves of the Breaker” in the natural reserve of Fara St. Martin, which D’Annunzio chose for the II Act of “Iorio’s Daughter”.