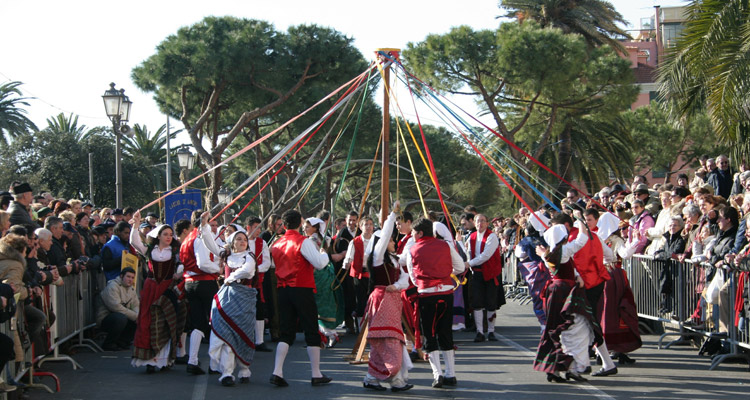 In few regions as in Abruzzo the folklore is still today an true note of local custom. The Abruzzo boasts a patrimony of magic and religious rites, of pagan and christian feasts, of saints to revere and of evil powers to be exorcided.

In Cocullo (L’Aquila), in honour of St. Domenico, it’s celebrated, the first thursday of May, the feast of the Serparis: the statue of the Saint unthreads in procession covered by alive snakes followed by thousand of believers. Many suburbs of Abruzzo preserve the habit to burn on the Christmas fire, little dishes that compose the menu, with the goal to let Jesus take part to the Christmas’ dinner. The most famous Christmas event of Abruzzo, develops in January: it’s the living Manger of Rivisondoli, played by inhabitants, which every year fight to have a role as a first charachter of Nativity.

Every month in year in Teramo Province are reach in meeting with tradition:

Sagra of Virtues – 1st May

Feast Lady of the Gracies – June

The Triumph of Peace – 26th July

Feast of Pasta and Beans – August

Sagra of Typical products of Teramo – 1st week in July

Feast of Attanasio – 2nd May

Procession of the crucifixed Christ / via crucis– holy Friday

Feast of St. Michael – 8th May

Lady of the Suffrage’s feast – 2nd sunday of July

Procession of the running Mary – Thursday after Easter

Feast of Beer and Porchetta – July

Feast of the Sea– August

The Window to he Park – June

Feast of the Madonnina – 1st sunday of August

Feast of the sacred heart – July

Palio of the Baron (Tortoreto Alto) – half August

Sagra of Bean and Costatella – July

Feast of the Mountain – July

Sagra of Chestnuts and Potatoes – October

WEEKLY MARKETS in the Povince of Teramo