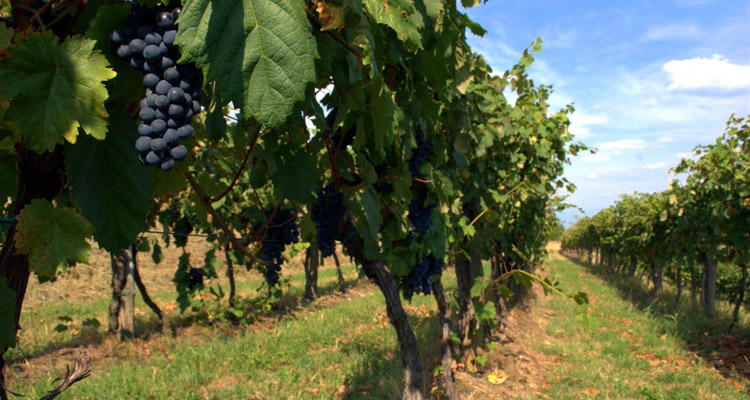 Abruzzo is the earth voted to nature, not only rich of bears and chamois, walls of rock and woods, protected in magnificent reserves, but also of placid sandy shores. From the tollgate in South Pescara on the A14 You go to Ripa Teatina, rich of cultivations and witness of a history which goes to the prehistoric, Roman and tall medieval eve attested by numerous archaeological recoveries. Taste the good Montepulciano d’Abruzzo, wine of an intense red color, at the Tenuta of Valletta Mezzanotte; savory the timballini of scrippelle, the lamb with cheese and eggs of the restaurant La Casa di Filippo.
Go on and reach Tollo, a suburb famous for the numerous prehistoric finds and dedicate Roman bronze-statues. Stop at the Cantina Sociale Tollo to taste its wine.
To this point go to Lanciano, that preserve still today a beautiful fortifications, the cathedral of Santa Maria al Ponte, wholly reconstructed in the second half of XVII century. Taste the bocconotto, a typical biskuit, soft and greedy, and take a turn through the confectioneries of the historical center, and try the tastes of the fish cooking in the restaurant Corona di Ferro. Leave Lanciano for the SS 652 that goes up the river Sangro goes up to the bifurcation to Archi, where You’ll rest at the restaurant Zappacosta, well known for the traditional cooking and the extraordinary cakes.

The itinerary continues touching Vasto: visit the civic Museum, the thirteenth-century castle, the church of Santa Maria Maggiore, rebuilt at the end of the XVIII century. We signal the Hostaria del Pavone, where You can taste another typical food of the cooking of Abruzzo: the Scapece, fried little fishes, preserved pesciolini with vinegar and saffron, soups of see fruits, full squids, stuffed Sardinians and brodetto alla vastese. From the national way SS 16, in direction north, You will reach the last goal of Your trip on the discovery of the tastes of Abruzzo: Ortona, production place of the annoia, traditional meat of th region, made of tripe and rose of pig, spicy pepper, seeds of fennel, salt, cornstarch, peels and juice of orange, all bagged in gut. To mention and visit the beautiful church of S. Caterina, founded in 900, the suggestive Palazzo Farnese and an interesting archaeological museum, that preserves prehistorical local finds of Italic and Roman age.
A walk among the lanes of the center is the pretext for a standstill inside a fresh and happy inn as the Cantina Aragonese, La Tavernetta degli Ulivi or the Azienda Agricola Sarchese Dora, which is famous for the handcraft production of an optim Trebbiano Abruzzo DOC and a very remarkable Pietrosa Chardonnay. From Ortona reach the tollgate of the highway again and set the end to Your excursion.

The coastof Abruzzo, with its beaches of gilded sand and the wild adriatic sea, decides to disclose its mysteries in an impassioning itinerary, that discloses its tacit winter shine and the wonder of the sea of Abruzzo, the gastronomy, the oil, the wine.
Start from Roseto degli Abruzzi, one of the more crowded bathing destinations in summer, because of the numerous demonstrations that it organizes, every year, for tourists. Interesting the prestigious Wine firms, Di Nicola, Scialletti and Contucci Ponno, that insert the town among the principals centers for the production of excellent DOC wines in Abruzzo.

On the SS16, in direction north, You’ll come to Giulianova, bathing town with a flourishing touristic dock as fulcrum, and center of one of the most beautiful Renaissance churches of Abruzzo, the Cathedral of St. Flaviano and the famous wine cellar Di Giovanpietro.

Crossing the coast You’ll meet Alba Adriatica, with its ample silver beach and from here, leave the National-Way to aim the heart of the hills of Teramo and meet Colonnella, the wine city, famous for the homonym wine cellar and the prestigious Cantina Lepore.
We advise to stop for a turn among the lanes of the beautiful historical center to admire the Tower of the clock, built in the XIV century. In the Azienda Agrituristica Zenobi You can taste the good traditional cooking, strong of typical dishes of the Region, as the vincisgrassi, the olives ascolane in the mixed fry, the ‘ngrecciata, the coratella of lamb, the fegatini of chicken with the eggs.

To west, You’ll meet the medieval town of Controguerra, a splendid foreshortening among the rivers Tronto and Vibrata. We recommend a standstill at the restaurant La Credenza, excellent meals both for the use of select ingredients and for the method of traditional preparation. Continue toward south in direction Nereto, after a standstill in Corropoli, for its archaeological recoveries and the wines of the Azienda Vitinicola Marcocelli.

At around 7 km from Nereto, You’ll come to Torano Nuovo, last goal of the eno-gastronical trip, ancient town, center of the important firm vitivinicola Pepe, known for the Montepulciano d’Abruzzo Rosso DOC.
We recommend the restaurant-pizzeria La Sosta, where the cooking of Teramo introduces particular characteristics: to taste the mazzarelle, interiora of lamb, cut thin, wound in leaves of endive with garlic, spicy pepper and parsley, tied up with budelline and crushes with lard and a spoon of wine.

The Agricultural firm countersignes its-self for the half-biological cultivation of the grapevines, that perfectly approaches to the family tradition, voted to the full respect of nature. The grounds, a feud granted by the King of Naples jointly to the noble title to the Family Cornacchia in the XVI century, are mostly calcareous and sunny, to an altitude of 240 mt s.l.m. and to ca. 15 Km. from the coast. The family devotes its-self with passion to the workmanship of the grapevine, creating everytime sincere and genuine wines, proper both for local consumption and to international marketing. The wines, bottled in chestnut tree washed with water and salt to cancel its bitterish residual, are the fruit of a great passion for the earth and the pleasure of sharping tastes.

The centenary Family firm, sinks the roots of its vineyards, ulivs and fields of wheat into the 120 hectares of the clayey ground of the hills of the Valley of the Tronto, slowly degrading toward the coast and grazed by the sweet sea-breeze. The Agricultural firm throws back the consumption basics and proceeds to a handicraft workmanship that gives to the wines the “strong and tender” taste of the hinterland of Abruzzo, besides to yield and floral tones.

Wines of depth character and personality, autochtonous vines sharpened in oak strokes in full respect of the nature, produced by the Family Vannucci in the hinterland of Atri. A family firm that chooses the philosophy of valorizing the local tastes, testimony and expression of the territory and the vines of Abruzzo connecting modern techniques to the full and reverential observance of natural laws.

The firm, a family management, is born in the Seventies with the name of Fattoria Zaccagnini. Since then, it tries to melt the binomy between wine and art, not only through the wanted structure of the wine cellar with the roof in form of gull and with the cooper that seems an eye profused toward the wonder of the National Park of the Majella, from the natural colors and from the natural materials of wood and stone, but also from the adoption of the philosophy of Beuys of the defense of natur. The wines of the Cantina Zaccagnini are born on the hills of Bolognano, on 80 hectares of fertile earths, caressed by the winds of the Gola di Popoli and stricken constantly from the rays of the sun, thrugh the union of a scrupulous scientific and technical study of the vineyards and the constant attention of famous enologues, that accompanies the workmanship of the grape up to the embottlement, allowing the appreciated wines Zaccagnini to be exported and winning in the whole world.

The passion and the appointment and the selection of a noble roe material devoted by Dino Illuminati in the wine realization on the hills of Controguerra, on a ground that’s blessed among the Gran Sasso Massive and the coast of the Adriatic, keep on creating a prestigious and rare wine destined to the cafeterias and the reserves of Italy and of the whole world for all the those people, who want to appreciate the product of a generous earth. The traditional genuineness of the wine, in the fusion of ancient and modern, that makes of every single Illuminati a reserve bottle.

Wander Routes for Trekking with Horses